As I conducted research for my proposal to encode Siddham in Unicode, I began to notice that the primary and secondary sources I examined all lacked a set of characters that are typically found in related Indic scripts that emerged during the 10th century…

Well, this is not entirely true. As I discussed in section 3.13 of the proposal, Siddham contains two characters, that based upon their form and function, appear to be the remaining representatives of a set of digits that were once likely part of the script. These characters correspond to a palaeographic form of an Indic digit TWO. But, in Siddham this sign has lost its numeric value and it lives on only graphically. Well, this is not entirely true, either. The sign may have lost its numeric value, but the vestigial character retains its numerical semantics in its function. This character is the repetition mark shown below:

The sign in question appears twice in the excerpt (middle row, characters 3 and 4 from the left) and is transliterated as “hūṃ”. This gloss is slightly misleading. The character itself does not represent the syllable “hūṃ”; rather, it represents a ‘ditto’ mark. Moreover, although it is graphically based upon a palaeographic digit TWO, it simply indicates that the word or syllable that precedes it is to be repeated; not twice, but just once. The two instances of the mark mean that “hūṃ” is to be recited three times, as shown. It appears that the editor of the original text provided the intended reading instead of ‘ditto’ for the sake of clarity.

This Siddham repetition mark corresponds glyphically to Devanagari digit two (२), but more so to the Gurmukhi digit two (੨). It seems that as Siddhamatrika made its way from south to east Asia, the Buddhist scribes and scholars who used it slowly discarded from the script features that they didn’t really find necessary or useful. So, away went the digits 0-1 and 3-9. The digit two (੨) seems to have struck someone as a handy way of indicating a “doubling” when writing or copying texts. So, what we have now in Siddham is essentially an east Asian ideographic interpretation of an Indic character that was originally and palaeographically a sign for a digit. The ‘੨’ is the only numerical sign that I have seen in Siddham texts.

Well, that is not entirely true either… In the latter stages of my research I found the following chart on a Japanese site: 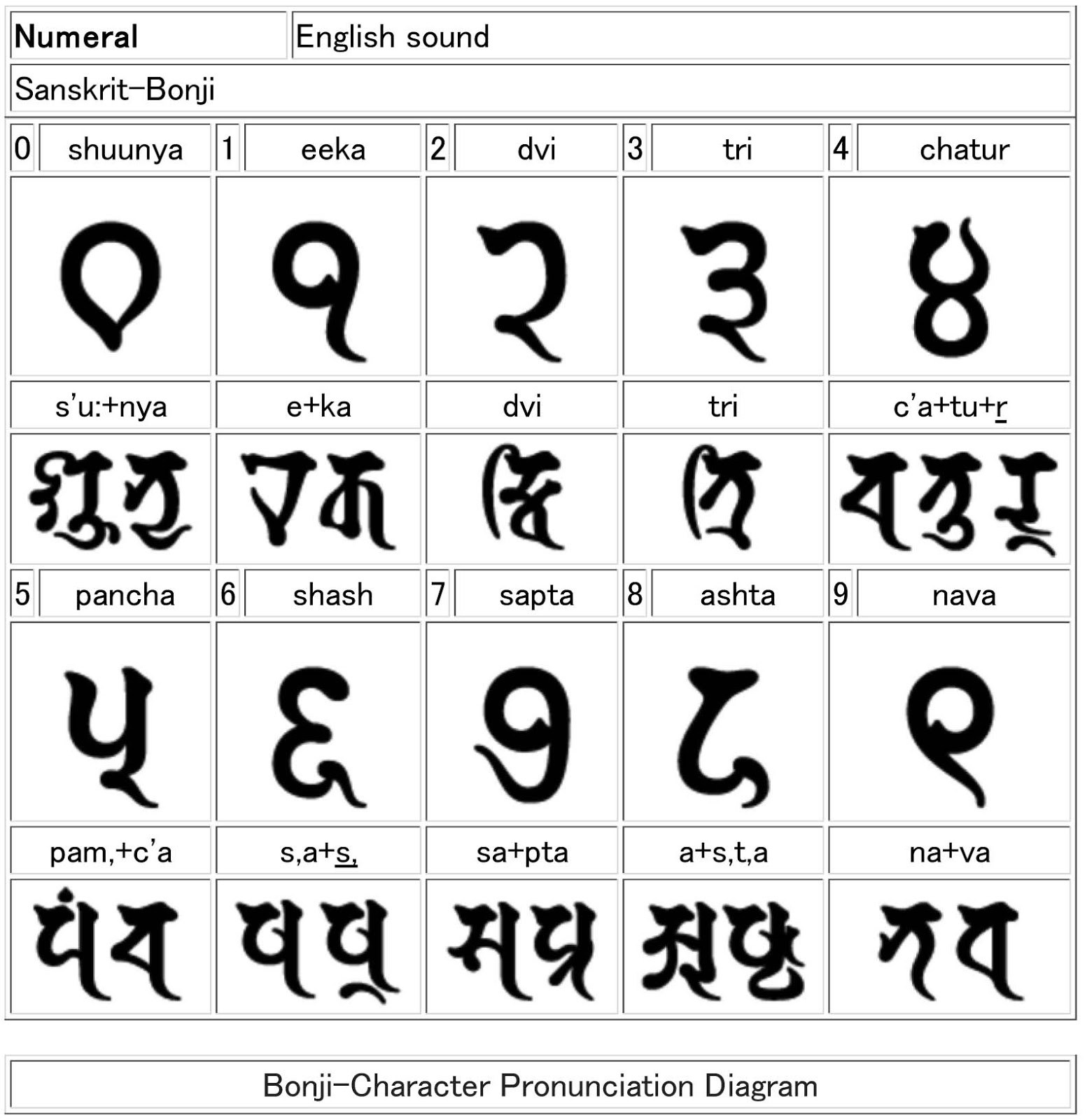 These “Bonji numerals” appear to be modern creations based upon Devanagari digits. I submitted a proposal to encode a set of digits in the Siddham block based upon these signs, but the Unicode Technical Committee (UTC) requested additional evidence of the use of digits in the script.

Does anyone know of Siddham manuscripts, pedagogical texts, or other records that contain examples of digits? Hmmm, at this point, I may even accept 入れ墨 irezumi as evidence, even if the UTC might not!